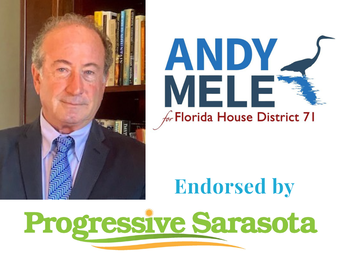 That’s why we were super stoked to see Andy file to run for the District 71 seat.  This is Mele’s first political race, but he is no stranger to politics in Florida and elsewhere.  Andy, who hails from New York, previously served as executive director of Clearwater, the Hudson River environmental group formed by folk singer Pete Seeger where he was instrumental in forcing General Electric to remove 300,000 pounds of toxic PCBs from the Hudson River.  More recently, he served as Executive Director of Suncoast Waterkeeper where he worked to protect the coastal ecosystem, halt phosphate strip mining and rampant development in Florida.  Andy has a master’s degree in environmental science.  His platform focuses on protecting Florida’s future by addressing climate change and promoting the idea that “the environment IS the economy.”  If elected, he will also put forth policies to address the COVID-19 pandemic; develop Health Care for All and expand Medicaid; expand unemployment insurance; raise the minimum wage to $15/hour and ensure strong public schools by ending privatization policies.