Join Progressive Sarasota Members Johannes Werner and Lynn Nilssen as they present a progressive platform for the City of Sarasota. Your input is welcome.
​July - 21st 2020  Cooperativism in the 21st Century 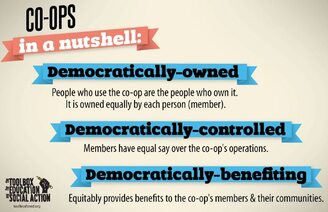 Why explore such an old idea as a new framework for social and economic organization of the 21st century? Because it has proven to be a healthy way to distribute the wealth we generate and to ascertain democratic decision making. Cooperativism is not a monolithic structure, it too adapts and adjusts to new situations, new understandings, and new needs. Effective economic democracy is like art, it requires constant practice and readiness to learn, to creatively adjust and incorporate novelty. Like art, it requires a strong base in the basic techniques, that then permit enticing creativity to flourish. In this session, we will not only review  the basic logic of cooperativism, but will also discuss the challenges and ways to overcome them. ​
NINA TURNER

​The State of the Progressive Movement  ​ - January 2019
Our Revolution is an organization built upon the success of Bernie Sanders’ historic presidential campaign.  By supporting a new generation of progressive leaders, empowering millions to fight for progressive change and elevating the political consciousness, Our Revolution seeks to transform American politics to make our political and economic systems once again responsive to the needs of working families.  Local affiliate groups around the country form the activist base of the organization.

Nina Turner is co-campaign chair for Berne 2020 and was the President of Our Revolution, which was founded in August 2016 to perpetuate and organize the political coalition that formed during Senator Bernie Sanders 2016 presidential campaign. Previously, she served in the Ohio State Senate, where she advocated for progressive causes such as education and healthcare reform. In addition to traveling the country championing progressive values, she is also a political commentator for CNN.
Andrew Gillum for Governor
Sarasota Bus Stop Event - August 24th, 2018
Video by Kacey ​Troupe
Andrew Gillum for Governor
Sarasota BarberShop Event - July 18, 2018
Photos by Snousha Gaude
Video by Kacey ​Troupe
NINA TURNER
Keynote Speaker
​CRITICAL TIMES CONFERENCE ​ - November 2017